On Saturday evening September 12th, around 20:00hrs, Station 16, along with mutual aid units were dispatched to 10 Brighton Ave for a residential structure fire reported with possible entrapment. Engine 16 and 16-8 were arriving on scene as the dispatch was being completed, and reported a 1 1/2 story single family dwelling with smoke showing. Units were advised that a handicapped male subject was believed to still be inside. Engine 16 stretched a line and found a fire on the front porch, and began to extinguish. Engine 16 officer and Deputy Chief 23 had made entry into the residence, finding a smoke condition and immediately located the male subject confined to a wheel chair, and moved him to a safer location. Subject was evaluated by EMS assets and refused transport. Minor fire extension was found in the attic space and extinguished. Additional units on scene completed searches of the structure, and ventilation. Chief Facciolo had the Elsmere Command, and no additional injuries to personnel or civilians were reported. 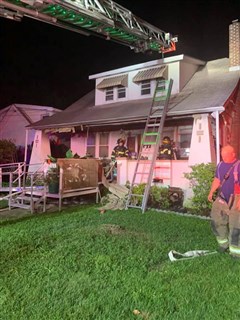 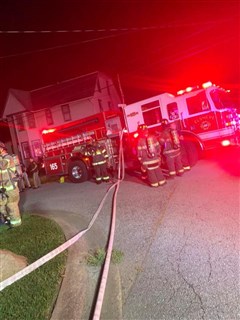