It is with deep regret the officers and members of the Elsmere Fire Company announce the passing of Thomas Santa Barbara Sr. Tom was an active life member and one of our fire police. The fire company sends our thoughts and prayers to his family and friends. Thomas Allen Santa Barbara Sr. Age 60 passed away on January 11, 2020 at home after a long and brave battle with cancer surrounded by the love and support of his family and friends.

Tom Retired from the Delaware Department of Transportation. He had previously worked at Angersteins, Bayside Security and Harvey Hanna/ Waste management. He had also retired from the Delaware Air National Guard 166th after 24 years of service where he held positions with the Military Police, Fire Service and finally retired in Roads and Grounds. While in the Delaware Air National Guard he served tours of duty in Israel, Kuwait, Hurricane Katrina, U.S. Border and the 56th presidential inauguration detail.

Tom’s true passions were spending time with his family and the fire service. He followed in a long distinguished line of firefighters starting with his grandfather, his father and his eldest brother. Tom was a lifetime member of Five Points Fire Company and Elsmere Fire company where he held the positions of engineer and firefighter. Later in life, Tom joined the Delaware State Fire Police Association where he continued his service as an elected Secretary. When Tom wasn't serving his community he enjoyed spending time camping at Holly Lake campground with family and friends. 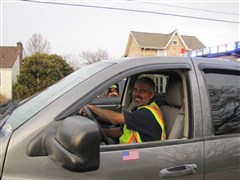